A princess of Mars is the first of eleven books in the Barsoom series. I’ve also heard it called the John Carter of Mars series.

This is a classic Science-Fantasy, published in 1912. Like other Mars novels from that time, almost all its scientific assumptions about Mars have been disproved.

This novel created and still personifies the Sword and Planet Genre.

Below is my review. For more information on how and why I review books read my post here.

This book only has two main characters. John Carter is veteran of the American Civil war and possibly many others, he refers to himself as a Virginian Gentleman. He’s a fighter and an impressive one. He looks thirty and has lived at least a hundred years. Interestingly doesn’t remember his childhood.

Where John Carter is impressive, his character arc isn’t. The only thing that changes is his understanding of Mars and his relationship status. That being said, he is an interesting and entertaining narrator/character. There is no doubt that he is a hero and he’s an entertaining guide to Barsoom.

The second main character is Mars, or as the natives call it Barsoom. There is more ink dedicated to her than to anyone else in the novel. A dying world with interesting and detailed cultures, the real character arc is Mars’. She goes from a war torn, segregated, and dying world to a united(ish) kingdom, but still dying. It’s a beautifully described world. At some points I preferred the world building and Martian history more than the actual story.

There are plenty of secondary characters some of which are fun others are down right boring. Overall, they feel unimportant next to John Carter.

The weakest character, as in most adventure stories from this time, is Dejah Thoris. Or the love interest. She’s less of a person and more of a goal for the protagonist. He treats her well but she has all the personality of an inanimate object.

I give it a 3 out of 5 for characters. Even though most of the characters are uninteresting, they are also unimportant next to the awesome John Carter and the brilliant Barsoom.

The book is written in first person, John Carter is writing his memoirs in the form of a letter to a friend. With few exceptions we are always dealing with John Carter and the way he sees the world(s).

The style is dry and at times, a little disconnected. When I say dry, I mean it felt academic. It’s a feel and style that was used a lot in that time and he does make it interesting.

One of the things that kept the book from feeling like a long Barsoomian discourse on history was the fact that it was so disconnected. The story would get a little dry and suddenly we’d be learning the history behind the Green Martians firearms. I’d get bored with the history and suddenly John Carter is kicking someone’s ass. It was a nice way of keeping the reader interested and informed.

I give the style a 3 out of 5. I guess I’m just a sucker for a first person narrative.

It’s difficult to tell which tropes the author is using and which he invented. At its base, this is an “Other World” novel, sometimes called “Portal Fantasy” or “Trapped in another world”. It’s a common story structure with immense customization. I’m not sure you can say it was influenced by The Time Machine or by Alice’s Adventures in Wonderland but they are definitely pulling from the same source material. Most likely, whether the authors did it on purpose or not, these stories are heavily influenced by old fairy myths.

Once John Carter arrives on earth (after an extremely bad portrayal of Native Americans) the story becomes a loose narrative of his journey around Barsoom. The only story motivation is survival. In the third act he is moved to action and almost single-handedly changes the face of Mars.

There are a lot of coincidences throughout the book that stretch believability along with John Carter’s inability to make a mistake. Other than the typical “White is right” and “Women are only good at being pretty” this book does have a few interesting messages. It’s definitely championing emotion, especially love, as what makes us human and what makes the difference between right and wrong.

An interesting essay could be comparing the cruel, barbarity of the Green Martians with that of the Humans in Aldus Huxley’s Brave New World and trying to associate it with their similar reproductive methods.

It could change with the rest of the series but the weakest part of this book is the story. I give it a 2 out of 5.

Was this book fun? Yes, Yes and yes. Maybe it’s the little boy in me (I’ve been meaning to get that removed) or the adventure lover but this book was a joy to read. It helped that it was tiny by comparison to other books of it’s genre. It made the bare-bones plot and history lesson seem quick and move along without getting dull.

Overall, if you like swashbuckling and classic science fiction than I’d recommend you read A Princess of Mars. However it does suffer from it’s age and wouldn’t make it into my top ten best books.

I’ll probably pick up The Gods of Mars at some point and see what happens to John Carter. Most of the novels are available from the Gutenberg Project for free, can’t go wrong there.

Overall it was enjoyable but not amazing. I give it a 65% enjoyability score.

Why am I writing reviews

I love to read. I wouldn’t call myself a heavy reader. On average, I only read one or two books a month. Since I love reading and I love writing. I’ve decided if I can coherently assess the books I read, than maybe I can understand why I like or dislike them. Giving me insight for my own writing.

Why you should care

If you’ve read my blog and liked what you’ve seen than it’s logical that you’d like the same things I do.

As far as my qualifications, I have

It’s not the greatest list of qualifications but I hope its enough to keep you reading.

I’ll be reviewing four aspects of each book I read. These for aspects represent things that I find important in my books. I’ll give each aspect a rating out of five and at the end give the book a rating percentage.

I am not reviewing if a book is good literature, or social commentary, etc. I am reviewing whether I enjoyed the book. I might do some literary analysis but most of it will be personal not scientific.

To enjoy a book I have to care about the characters. That doesn’t mean they have to be nice, good, or awesome. I just need them to be interesting and relatable.

This is an extremely personal aspect of books. I have certain styles I can’t stand and some that I love. A writing style can elevate a mediocre story into a great read and vice versa.

I’ll be honest. I don’t believe in an original story or idea. I do believe that there are original ways to put story elements together. There are themes, character arcs, plots and subplots, and multiple other elements that go into a story.

You could call it the X factor, but sometimes it makes all the difference. A novel could be bland in every other way but still fun to read.

As my wife can tell you, I’m not always right. Everything I say here is my opinion. If you disagree or want to discuss my points, feel free to comment.

The TARDIS wants to go to Hawaii, I think! 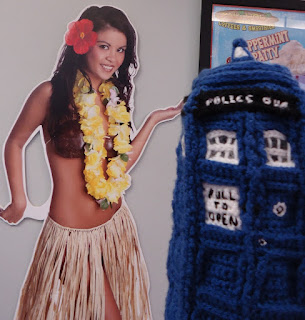 I just LOVE the pretty colours in this, so I cropped the original picture in two ways.
1. More TARDIS, less colour.

The TARDIS visited the Capitol Building! Wait – something’s not right here. Can you tell me what’s wrong with this picture? 😉 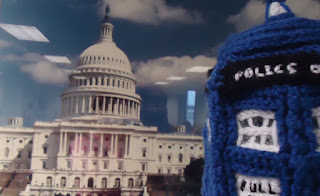 Look how empty the airport is! I’m assuming everyone joined the Doctor in the TARDIS. 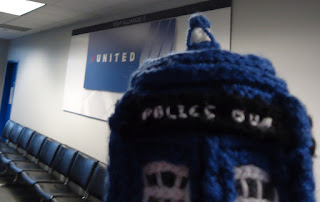 Another line-up, this time to get into the TARDIS! (Possibly the same line as before, just from a different angle.) We were there a long time. 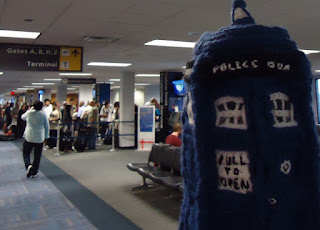 The TARDIS feels right at home here at this British Pub! Unfortunately, we are still at the airport in Dulles. This, by the way, is the second day we were stranded there. 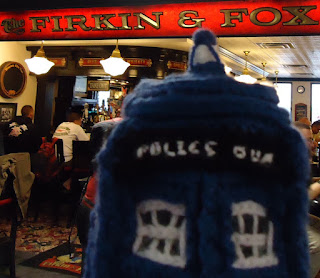 Here we are at the gate to board the TARDIS, however, it looks like there are no departures or arrivals scheduled! Why not?

The phone is broken! Maybe the phone in the TARDIS will work? 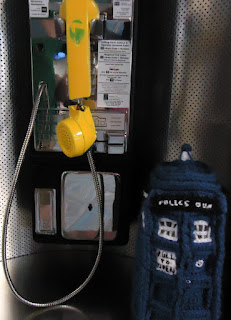