Hello everyone! My name is Rebecca and I’m so happy to be writing a guest post for you today!

I’m turning 28 this year, and like a lot of people my age, I was BIG into Harry Potter as a kid. Midnight releases for books and movies, all the merch, playing Harry Potter games with my sisters, the whole deal.

So when a good friend from University invited me to a conference in London, England, I knew I would have to visit some Harry Potter attractions.

We had a busy trip, and while I didn’t make it to King’s Cross Station (oh look, a great excuse to go back to England!) we did go to the Warner Brother’s Studio Tour to see the sets and props used in the making of the movies.

And it was so worth it.

The Studio Tour is outside of London and the tube doesn’t run there. However, there are lots of travel packages  that offer a bus to and from the tour, departing from convenient places around London (often near major hotels).

The only downside of taking the bus is that you have to catch it to get back to the city! I could have stayed all day! That being said, the timeframe that we had (approx. 3 hours) was reasonable and I never felt like I had to rush by something super fast to be able to make the bus.

The tour is set up a bit like a museum; most of the items are behind railings so you can’t touch, and there are information sheets all over telling you about each item, and fun “behind the scenes” facts. There are also video clips playing –  from the movies, as well as interviews with the cast and crew.

The tour begins in the Great Hall, as if you were a student arriving at Hogwarts for the first time!

One thing I appreciated was that there was no forced Sorting ceremony. While this might be fun for some people, I know that for many adult fans, we know our houses and definitely have strong house loyalty! (Team Ravenclaw here!)

The great hall was amazing, (the whole tour was) but there were two instances in particular that gave me the WOW factor.

Do you remember in Harry Potter and the Philosopher’s Stone when Hagrid takes Harry to Diagon Alley for the first time ? That was a magical scene in both the book and the movie, where you really get to experience the magic of the wizarding world.

Walking into the set for Diagon Alley – it all came flooding back. Suddenly I was 8 years old again reading my first Harry Potter book. That magic and pure joy was truly something special.

The second location where I got that feeling was the Hogwarts Castle room. This is where they have the model of the castle that was used for all the external sweeping shots. You can see every tower, all the grounds, Hagrid’s hut. I actually teared up a bit.

Aside from the marvel of all the sets and props, the staff were also amazing. In Ollivander’s wand shop, they’ve written the names of cast and crew on the wand boxes. When I was there, a staff member was sitting with a young child who was asking where all of the character’s wands were. And the staff member knew each one! She was using a laser pointer to indicate the appropriate wand boxes all around the room.  I’m sure that was a special moment for that child, and the staff member sure made an impact on the guests!

I could go on all day, but I don’t want to spoil that magical childhood transportation moment for anyone!

I would highly recommend this tour to any and all Harry Potter fans – no matter your age! I will note that part of the tour does go outside to the Knight Bus, Number Four Privet Drive, and a few other locations, so check the weather and bring a jacket if needed.

Thanks again to Jen, Eric, Dragon, and baby Pegasus for the opportunity to write for you today!

I saw MiB:I last night. It was so much fun; probably helped by how excited we got every time Les Twins (YouTube, Instagram) were on screen (which was often, but not often enough IMHO).

The cool thing about this movie is that we saw a lot of different locations that would make quite the fun trip.

We start off in New York City.

Take the hyperloop to London.

Travel to Marrakesh in Morocco.

Hmm… I guess we’ll have to start working on the hyperloop and alien tech to get between places….

Are you a fan of Rocky Horror Picture Show? Do you like to travel?

Because the castle used by Dr Frank-N-Furter in the film is an ACTUAL castle in Windsor, England, and you can actually stay in this luxury manor-turned-hotel.

The castle is called Oakley Court, and it’s just twenty minutes from Heathrow, right on the River Thames.

Every year in August (on the Bank Holiday Weekend), Oakley Court hosts a RHPS picnic and screening of the movie including an overnight stay. 2019 is sold out (unsurprisingly) but their wait-list has room and 2020 hasn’t opened its bookings yet, so keep your eye open if you’re interested!

If you want to stay here on a regular day, you can do that too. There are nine suites within the original structure of the manor, but 118 rooms in total. So you can decide how luxurious you want to be.

In honour of this spooky holiday, I would like to introduce you to the Uley Long Barrow.

Barrow means a mound placed over a grave/tomb, in case you were wondering.

Numerous skeletons have been discovered within it over the years, and there is evidence of disturbances over the centuries. But considering the barrow is thought to be at least five THOUSAND (not hundred) years old, I guess that makes sense.

Uley is located in England, near Gloucestershire in the Cotswolds, just north of Bristol and Bath and south-west of Stratford-on-Avon.

And guess what? You can go right inside it! (Be prepared to be squished and get very dirty!)

Are you interested in travelling to South-Western England? You can contact Jennifer Desmarais through Orleans Travel. jennifer.desmarais@orleanstravel.ca

A few years ago, I really got into Call the Midwife. There were only a few seasons out at that time, and we voraciously devoured them. I had to stop watching when I got pregnant, because hormones, but I look forward to the time when I don’t get all weepy when I watch it.

However, if I ever get the chance to go to Chatham in South-East England, I am going to go on the Call the Midwife walking tour in the historic Dockyard district. The tour is 90 minutes long with a guide, and you get access to the rest of the Dockyard during the rest of the day.

If I hadn’t wanted to visit Oxford, England before, I want to go there even more now!

The museum itself is planning a renovation, which will make it 100% wheelchair accessible by Summer 2019.

Geared towards children and exploration, The Story Museum features the Mad Hatter’s Tea Party, the Wardrobe and Beaver’s Den from Narnia, and many other iconic scenes.

They also host events and week long courses for children and adults alike.

I was recently made aware of a private club in London that was organizing Harry Potter themed dinner events on Fridays and Saturdays in August and September. Apparently they were so popular that they sold out, so the club has added more to fill up the rest of 2017.

The club’s name is The Library, and they are located at 112 St. Martin’s Lane, Covent Garden in Central London.

You can read more about the event here, including an abbreviated menu.

In honour of The Hobbit Part 2 coming out today, here is Sylvester McCoy holding the TARDIS at this past weekend’s Ottawa Pop Expo.

There were two very beautiful photo-ops in England, and I took them both! (I’m sure there were more!) This one looks like a ginormous lamppost! 😀 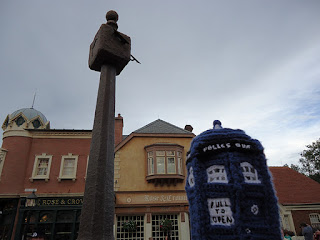 The TARDIS is in England, which is as it should be!