Virtual school was a little rough this week, although it wasn’t Dragon’s fault. The other kids kept turning on their microphones without permission and both teachers sounded like robots. Dragon had a bit of sensory overload from all the noise and it made it hard for her to concentrate. They worked on syllables that started with “N” today, with Dragon seemed to enjoy.

After recess, they continued with the N syllables game.

After lunch, they talked about the difference between possible and impossible, and were asked to come up with sentences describing one of them. Dragon said that it is impossible for 1+3 to equal 2.

She also presented her paper boat that she made last week. She needs to practice speaking louder. But she said “bateau de papier” and tried to answer the questions.

She did ballet 2 times this week.

Piano: she practiced her finger exercises every day this week. Lesson: Finger exercises are going extremely well. They worked on the Frogs and her timing is getting better. The Raindrops got all the notes no problem, a little trouble with the timing. Then she played the Bells and it was perfect, timing and notes. Kittens, got the notes but not the timing. And then they did chop sticks and she’s doing well.

We have a French playlist that I can play through the Google mini, with a variety of artists. Dragon has mentioned that she really likes Coeur de Pirate. So do I.

We did not do any crochet this week.

We are working on yesterday (hier) and tomorrow (demain) around any given day. The months of the year is going well. We’re working on the month before and after any given month. That’s coming slowly.

The saisons de l’année are all memorized. We’re working on how each of them feel and the types of things we can do during each of them.

When I ask her “combien” for any of the above, she responds in complete sentences.

Printing went very well this week. She drew a picture on the last page of three people swimming with jellyfish. They are all very happy.

She had no problems with the counting worksheet. We counted by 10s to 100 and counted up to 50. We also played dominos.

Math was interesting. She resisted trying to do it my way a couple of times, but then it clicked. Either that, or she recognized the pattern…

We read stories from the teacher’s outline that was sent to us on Monday. She enjoyed that, and we will continue to do it next week.

We watched Raiponce in French on Disney Plus, one episode a day. Dragon is enjoying it immensely, and is even recognizing some words!

Make fish and chips – Dragon and her papa followed our recipe for beer-battered fish and chips. They also made zucchini sticks. I think they were the best that has ever been made in our house.

Learn about sustainability in fishing – Dragon enjoyed watching the videos, but she said that she didn’t understand much. After talking about it with her, she seems to have understood the basics.

Learn about shipwrecks – She was fascinated by the idea that there were whole ships under the water. She wanted to see a pirate ship.

This is one of my favourite father-child movies, so of course I had to include it for the Father’s Day movies.

Here is the link for the downloadable materials. (Please let me know if you have any problems so I can fix it!)

Summary of the week

We talk about the days of the week and play games with the cutouts of the names. We do the same thing with the names of the months of the year. You can find the print-outs here.

Make fish and chips – link to our recipe

Learn about sustainability in fishing – link to reference videos

This little Nemo was found with the TARDIS at Ottawa Comic Con!

Dude! The TARDIS is riding on the shell of a turtle!

Bruce from Finding Nemo gets ready to take a bite out of the TARDIS! 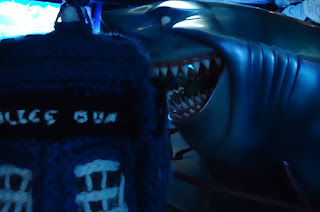