This recipe is inspired by Alton Brown but I made some modifications in the proportions and spices.

Do you have a favourite fish recipe?

There’s something fishy going on here – if we were visiting Ariel as a mermaid, then why isn’t the crochet TARDIS wet?

Apologies for the blurriness. I blame how dark it was.

Lots of stuff to talk about today. Let’s get started.

They say news comes in threes. At least my Mom used to say that my grandfather said, “Never two without three.” (I’m never quite sure if he actually said those things or she made them up)

A few months ago my wonderful Wife received a contract to publish Blush, a card game to open communication channels about sex.

A Study in Aether (Formerly The Mitten Wizard)

Last week I signed a contract to publish my first book. Hopefully to be released this year.

Today I’ll be signing a contract for Parasomnia. It’s with the same publisher, an awesome small press, as A Study in Aether.

I’m still in shock at how close the two contracts came in.

After almost 7 years of writing seriously and trying to get published I get two contracts? I feel extremely thankful and I little bewildered.

At a party this weekend I got a fortune cookie. It said, “Wisdom comes not from age but from experience.” It’s right but boy did it make me feel old and unwise.

I haven’t lived the most adventurous life but I’d like to think I’ve learned to be wise… maybe just a wiseass.

I will smack you in the face with fish

I read this article this morning and found it to be overall condescending. Maybe it was meant as tongue in cheek… Maybe not.

Either way, be warned, I’m extremely proud of the stuff I, and my wife, make and sell so you’ll be getting smacked in the face by fish… a lot.

So the serial stories aren’t attracting a lot of votes but they do attract a lot of readers. This makes me think I’ve given you too many choices.

You have until Wednesday midnight to vote on which story you’d like to proceed to the next step. The story with the lowest vote count will be eliminated and I’ll put up a new poll.

Hope you’re having a great day!

This little Nemo was found with the TARDIS at Ottawa Comic Con!

This sculpture is called “On Bubble Pond” and it was made by Ted Hayes of London, ON and Tyler Hayes of St. Thomas, ON.

The second mural is of a beautiful fish! Still in China, EPCOT, just on the other side of the pavilion. 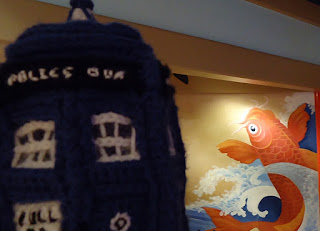