Little Dragon is going through a phase of discovering what she likes. It’s quite frustrating since it changes ALL-THE-TIME but I understand it’s because she’s trying to figure out what she likes and who she is.

“I really don’t like spicy,” she’ll say and then turn around and ask for Jalapeno cheese or extra hot sauce on her meal.

It’s as adorable as it’s frustrating. I know it’ll even out, but it’s hard to guess what she’ll eat. Sometimes when I ask her she changes her mind by the time it’s in front of her.

In the same vein, I’ve noticed that my tastes have changed in music at least. The Mystery Book Project is set in 2002 and we made a music playlist appropriate for the time.

There’s a lot of music from the time that I really enjoy and then there’s some others. At the time I enjoyed Eminem and Nine Inch Nails. They spoke to a part of me back then. Now not so much, it’s either a lot of whining and noise that sounds either entitled, pretentious, or both.

Ok. I have a lot of writing to do.

Be safe and be kind,

Some of my favourite memories from being a kid were meals that I got to build with my family but were just for me. Tacos, nachos, and pizza were event meals where we each got to make our own.

I’ve been coming up with other options to do with my kids and even guests. It makes them feel more connected to their meal. I guess it’s an IKEA effect for food.

Quiche is great for this, it can handle almost any extra ingredients, it’s filling, and most people like it.

What you need to make it is:

The important thing to remember is the ratio:

One caveat I’d have is if you’re using watery veggies like zucchini or mushrooms, you should lower the cream to 1/3.

There’s no rule as to what you can put in, but all meats should be pre-cooked and I’d recommend cooking the watery veggies too.

The rest is up to you.

I developed this recipe when I hosted a large dinner in university. I effectively put everything I had in a pot with rice and tater tots. It’s a great hearty-type meal for cold days.

It’s also really quick and easy to adapt to your taste.

Quick and easy way to use leftovers from a turkey dinner

So what do you think?

I love everything pumpkin and decided to have some fun and make a new soup.

It turned out wonderfully and is Toddler Dragon approved.

All the yummyness of squash soup with a hint of pumpkin pie.

I recommend this recipe from Alton Brown for making pumpkin puree.

If you make the soup, let me know what you think.

Menus, festivals, food news, and guides to the food at Disney World and Disneyland in California.

Are you interested in travelling to Disney? They are currently taking bookings until Dec 31, 2019! You can contact Jennifer Desmarais through Orleans Travel. jennifer.desmarais@orleanstravel.ca

These melons were made for drumming!

Yesterday, I posted on my personal Facebook wall about a ridiculously cheap sale from Toronto, Canada to Bali, Indonesia. The prices have obviously gone up since then. I wish we knew now whether or not Dragon is a calm baby, because I was seriously tempted by the price. Hopefully another crazy awesome deal comes up in September/October, like the one to Japan that popped up about a month ago, or this one.

Bali hasn’t had many big films set on it’s amazing shores. The only one I recognized was Eat Pray Love. The third portion of the film was set in Ubud, Bali.

However, despite lacking in fandom culture, Bali has a DC comic book shop, and a lot of their own culture to sample while visiting. The number of temples on the island is staggering, and the craftsmanship of sculptures and other artistic pieces is stunning. The food is excellent, and scenery out of this world!

If you’d like help booking this trip (or others!). You can contact Jennifer Desmarais through Orleans Travel. jennifer.desmarais@orleanstravel.ca

My Wife (AKA. the Weditor) isn’t feeling well today. Whenever she’s feeling particularly bad I make her Chicken Noodle soup. I should save the bones from our turkeys but whenever I do they tend to freezerburn.

If like me you want to make fresh homemade soup once a year. Here’s a recipe for you.

You can buy soup stock but it’s 90% salt and if you truly want to show you care, make it yourself.

Debone the chicken and separate into three piles; Meat, Bones, and fat/Skin. The skin adds way to much grease. Put the odds into plastic based sausage casings for sale.

Clean and Cut but DO NOT PEEL the onion, carrot and ginger. (The skin will the soup the nice yellow colour and add lots of flavour)

Cut the rest into chunks (You don’t have to be precise here I usualy just rip the stuff apart with my hands) and throw into a large pot. (Something that can hold 14 cups)

Bring to a boil. Stir and lower the heat to a simmer.

Cover and let simmer for 3 Hours.

After the simmering pass the soup through a colander to remove the soggy veggies and chicken bones.

You can now make soup or cool and freeze the stock for later.

Slice your celery and carrots, chop your leafy stuff, and place into the soup stock. Add chicken, thyme, pepper, and Noodles.

Bring soup to a boil, stir and then let simmer for half an hour.

Taste the soup. If it tastes great then put the Soup Base packets away, if it tastes a little watery (It probably will. Chicken isn’t the best kind of bone for flavour) add a packet of chicken base stir and taste again.

Add salt if necessary but you probably won’t need it.

You can eat the soup for the next few days or you can freeze it for up to 6 months.

Hope this helps you, or someone you love, feel better.

Wouldn’t it be mean if I posted a picture of the sign, and then not the food? And isn’t it mean that I’m posting the food, and you can’t have any? >:-) It was super good. 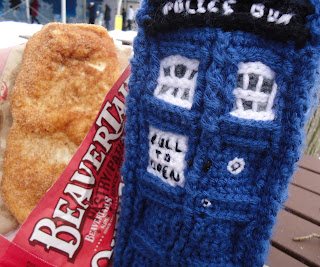 First thing you should do is take the meat out of the fridge and place it in a big bowl. This way the meat will be less cold on your hands later. If you’re using medium or regular beef instead of
Extra lean, I recommend doubling the amount of Crackers or Bread Crumbs.

Finely Chop the Mushrooms. They should be around the size of a pea. Any bigger and they will fall out of the meat, any smaller and they’ll turn it into mush.

Put all the ingredients into the bowl with the meat. With clean hands, mush it all together. Make sure that everything is well mixed.

Once everything is mixed together, you’ll be tempted to stop working the meat. Don’t. The longer you work the meat the more it’ll stick together when you cook it. This should take a minute or two of extra time with the meat.

Roll your meatballs in the palm of your hand and flatten it in the same way you would dough. Make sure to flatten well. They’ll retract and try to become balls again when you cook them.

If you want thicker burgers, split your meat into six instead of eight.

Cook on a BBQ, Griddle, or in a pan for around 3-5 minutes per side until they’re brown throughout. Don’t squish them with your spatula, or you’ll have dry burgers.