From our family to yours, Happy Holidays and let’s hope 2022 is a better year for everyone.

We’ll post a picture of the kids and Éric in formal wear after Christmas.

Thank you for reading and stay safe out there!

In case you hadn’t thought of it, small batch fresh roasted coffee is a great choice for presents. As is crochet.

Note: a lot of teachers drink coffee. We also have gift cards for those who are virtual.

Use BOOKMAS as a code on checkout for 15% off your entire order if you buy a book.

Thank you and happy holidays.

From our family to yours, we hope these holidays find you happy and safe!

From our family to yours, we hope you have a fabulous holiday season.

When I think of Germany, several things come to mind: castles, forests, beer (not my thing, but they are definitely known for it!), and CHRISTMAS MARKETS.

If I were to travel to Germany, I would want to go sometime around the end of November to the middle-end of December, because you can see the castles AND check out the world-famous Christmas Markets.

I checked out two top-ten/eleven Christmas Market lists, and BOTH list Nuremberg’s Market as number one.

Not only does this Market run from the end of November to Christmas Eve, but it’s one of the oldest Markets in Germany, originating sometime in the early 17th Century. They only allow handcrafted goods (something of which I highly approve!) and there is a parade of the Christkind child at the opening ceremony.

It feels like there is a Market for every style and in every city. You could take a cruise along the Rhine and stop in cities along the way to visit lesser known Markets, you could take a train between the big cities and go to the bigger Markets, or you could take a guided tour specifically geared towards seeing multiple Markets.

Here is a list of the dates for all the Christmas Markets in Germany. I was astonished by the number.

I’m getting excited about the Holidays. Are you?

Are you interested in travelling to Germany this Holiday season? You can contact Jennifer Desmarais through Orleans Travel. jennifer.desmarais@orleanstravel.ca

I love coffee (if you’ve read this blog for a little you probably know that) but I also have a soft spot for good tea. I mean loose leaf, flavourful, and bold tea.

That’s exactly what you get with all the different blends from Heart Tea Heart.

I’m partial to the Knights of Avalon, the English Breakfast, and for reasons that are obvious in the next picture, the Harvest Apple Oolong.

Heart Tea Heart has a pop-up location for the holidays and is stocking books along with tea. Including mine.

They’re at the Merivale Mall 1642 Merivale Road, Ottawa, Ontario! Go check them out.

It’s the first of December and that means that Christmas is just around the corner. We’ve been listening to holiday music for the past three weeks and other than “Last Christmas” I’m still loving it.

There are all kinds of reasons I love the holidays, the snow, the presents, sappy movies/tv, spending time with family and friends, but most of all, it’s a time that most people feel more hopeful.

I hope you grow up with the kind of holidays that your Mum and I had. Our parents went out of their way to make it a loving and wonderful time.

As much as I love this time, I’m always a little sad. It reminds me of your Gramma. She loved this time of year, she’d get as excited as a child. I can still picture her with her santa mug of coffee and a mischievous grin.

It wasn’t an easy season for her. She wanted to give me everything the other kids had but couldn’t afford it. I was still spoiled (especially by your Uncle Dan) but I remember the pain on her face when we received food boxes. It hurt her pride but she knew she needed to accept it.

No matter what happened, she made sure it was a great day filled with laughter and family.

She’s been gone for eight years now and when she died I took custody of an old box. It was packed in 1996 and says not to open until 2016. I remember packing it with some of my favourite toys, although I don’t remember the toys.

She would have loved you sooooooooo much,
Your happy and sad Papa

Let’s talk about the most imaginary of friends, Santa Claus. I read an article called “In Defence of Santa Claus” and it made me think. (Sorry, no angry rant)

I’m not sure what to do when I, eventually, have children. I discovered the truth about Santa when I was relatively young. It wasn’t a shock or really much of anything. I just realized that my mom and brother had put out the presents.

My wife, on the other hand, was told on the bus and got into a fight (not physical – it involved a lot of yelling) about it and wouldn’t believe it even when her parents told her.

Why was it harder for her than for me? I don’t know. Maybe it was the level of honesty of our parents? My wife’s parents were always completely honest with her.

My mom, on the other hand, reveled in telling fanciful lies. She had me convinced for a long time that one of our ancestors had created French Fries. She even had a long elaborate story to go with it. It was her way of both teasing and training me not to believe everything I hear. They were always interesting and fun. (I miss her.)

So what does that mean? What does a little fib matter if it brings magic to the holidays? Saying that Santa brings magic, makes it sound like those who discover the secret don’t have magical holidays. That’s simply not true. There’s something special about the holidays that is more than the sum of its parts.

I’m leaning towards letting my future kids know that it’s a story. Does that make me:

What’s your opinion on Santa? Malicious lie or Fanciful fib?

There is another war on the holiday season in which most people participate. The regulation of the holidays is something that gets more annoying every year. Arbitrary rules like, “No Holiday music until December 1st” or “No decorations until American Thanksgiving” are everywhere and people will get into loud angry debates about the “Proper” thing to do.

The holidays are stressful, and people, as much as they like the days of, hate the lead up. The planning, the buying, the same 3 songs sung by 20 different people which play on the radio. I get it.

The biggest new trend now is the, “Respect our Veterans. No Christmas until after Remembrance Day!” As if the two are mutually exclusive. If you have a wreath on your door, or lights on, or are selling Holiday themed anything, you have no respect for Veterans.

BULLSHIT! and to hell with your emotionally manipulative crap! Your hate and fear of the coming holidays has nothing to do with respecting the brave men and women who fought and died to protect our freedom. Shame on you for using Veterans to legitimize your own personal dislike of the holidays

True respect has nothing to do with your decorative preferences. It has to do with your actions towards the Veterans. Wearing a Poppy, talking to the soldiers around you, telling them you appreciate their sacrifice, volunteering or donating to those associations that help Veterans, and going to Remembrance Day ceremonies.

The holidays aren’t starting any earlier than they have in the past twenty or thirty years. Decorations start appearing near the end of October, and on November first, all the places the Halloween decorations held is filled with winter holiday stuff.

The winter holidays are an industry. They push our economy in a huge way. They are the yardstick the economists use to know the health of our economy.

It’s ok not to like it. I won’t judge (Others might, but they’re jerks). But if you truly hate it, for whatever reason, channel your anger and frustration into something useful. Volunteer your time, donate money, etc.

If someone is being genuinely hurtful, racist, or mean, then feel free to let loose; but don’t get on a high horse and try to police others’ harmless love of the holidays.

Have you been yelled at for celebrating too early?

Merry Christmas one and all! I hope you enjoy this special non-travelling picture of the TARDIS, with our Christmas tree! It does not have a weeping angel as the topper. 😛 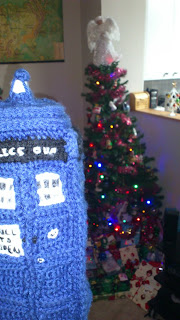