This mashup of characters makes me incredibly happy – and curious. Lilo (with Scrump), the TARDIS, and Stargate Command? How did they all end up together? Are they looking for Stitch? Send me your headcanons!

(Sorry I cut off your Stargate patch!)

The Weditor and I were talking about genies the other night around 11pm while the Dragon roared herself to sleep. I’m sure that’s normal conversation for a married couple as they’re going to sleep right?

We were discussing how she had been surprised when a genie turned out to be malicious, and I really wasn’t. It’s not that I’m smarter (Hahaha, far from it). It’s that we were exposed to different kinds of genies. She was mostly exposed to Disney’s Aladdin and I Dream of Genie, while I spent my youth reading horror and adventure stories like Goosebumps and Bruce Coville. We’d been exposed to different Scripts for what it means to interact with a genie.

When I talk about Scripts, I’m talking about tiny stories and definitions that a writer doesn’t need to explain because the audience already knows them. It’s a form of shorthand that we use to create consistancy and fast paced narratives.

When someone reads Genie, they will assume certain things are true. (Eg. There’s a lamp, grants wishes, Middle Eastern origins, etc.) Scripts are extremely important and we use them all the time. Often when a character is alien to the main culture, them not knowing the Script is played for humour.

There’s an episode of Stargate SG1 where a character is telling the group they’ve been impregnated without having sex. When asked if they’d ever heard of anything like that one of the characters replies with, “Vader,” and a second replies with, “I was thinking of King Arthur,” to which a third character goes, “You were!?”

A virgin giving birth is a simple Script that we associate with Christian mythology. By naming other less known instances and avoiding it, the writers are playing with our expectations in a humorous way.

This subconscious use of Scripts is one of the biggest reasons that when you write you need to know your audience. Either while you’re writing or while you’re editing. Using an unfamiliar Script or a different version can not only throw someone out of the story, it can confuse them enough to stop reading.

Always make sure your stories go through multiple editors or beta readers and you’ll find how some people have no concept of certain kinds of Scripts, and others are so aware they think it’s obvious.

The next book of mine to be published is called The Sign of Faust and deals with a genie, D&D, and a lot of confusing wishes. It relies on the audience understanding certain fantasy Scripts. One of the editors had a little trouble at some points because they weren’t familiar with the Scripts, and because of that I made sure to explain a little more to avoid confusion.

I’ll talk more about Scripts and how they are similar but different from Clichés and Tropes in a later post.

Fiction has had a lot of influence in our daily life. Just look at all the gadgets that Star Trek suggested would be the way of the future, that we actually have now in 2016! Tablets, communicators, cell phones, etc. But I’d like to look at the places that have been influenced by fiction.

Cheyenne Mountain in Colorado is the base for NORAD, but there’s rumour that there is a door that has a sign saying “Stargate Command”. Unfortunately, since the US military moved back into the mountain, only tours with “a mission-critical rationale for visiting the mountain, where the tour is essential in performing their daily functions in defending the homelands” may enter the complex. Darn.

Any Harry Potter fan would enjoy visiting King’s Cross station, and they’ve even set up a trolley halfway through the wall between platforms 9 and 10. The station also has “Hogwarts Express” listed on their screens at 11 am on September 1st. I would love to show up on that day at that time, dressed as a witch. Anyone want to do that with me?

Although the Sherlock Holmes house doesn’t exist at this address, there is now a Sherlock Holmes Museum that you can go visit. When Doyle wrote the series, Baker St only went up to #85!

There is a fire station in New York, Hook and Ladder Company 8, that was the setting for the Ghostbusters headquarters. They have some cute little nods to the movie, both inside and out.

Let me help you plan your trip. You can contact Jennifer Desmarais through Orleans Travel. jennifer.desmarais@orleanstravel.ca

The TARDIS is about to be disintegrated by a Zat’nik’tel! I hope the Doctor explains himself quickly.

Nicole de Boer (Twitter) was such fun to meet! Eric has a bit of a crush on her, so it was nice to see him flustered instead of me. We asked her if there had been a plan to make a spin-off of her all-girls team in Stargate Atlantis, or at least plans to bring them back. She said that yes they were supposed to come back, and that there was going to be a love story between her character and the doctor, but that the series was cancelled before they could work in that story line. Too bad. They needed more female actors on that show. 😀

I’m neck deep in a new novel set in a psychiatric institute for people with Parasomnia. So far it’s a lot of fun to write. I’m still working on the concept for my Vlog. Testing things out, playing with the equipment, and being a total chicken. On top of my weekly Modern RPG that I’m running.

Still no word about the book I submitted. Hopefully before March.

Something that’s been draining a lot of time and energy from me lately is being sick. I spent a few days last week, completely dead. To top that off both my wife and I are starting to feel colds. Hopefully they’ll go away, or we’re nuts, or both.

On their Facebook Page, Silver Stag Entertainment asked for suggestion for movies. In case you want to do a psychological analysis of my mind (Please don’t, that way leads to madness.) here’s what I suggested:

They also asked on their Goodreads Book Club, for book suggestions. Here are mine:

That’s it for now. I’m going to see if I can nap with my eyes open.

If Gandalf can do it so can I!

Ajay was busy doing a segment I think, but he took a brief moment to pose when he caught sight of the TARDIS. He is another host of Inner Space. 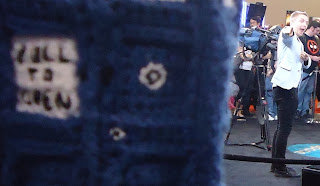 We saw Ajay hosting at the Richard Dean Anderson panel. We were not in a position to get a good picture. 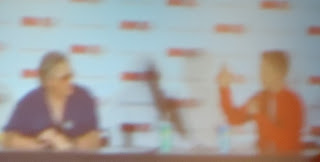 I am only going to be posting on Mondays and Thursdays until further notice. As I am gearing up for my first ever Geek Market, where I will be selling my creations, I do not have as much time to take pictures. I will try to keep to this new schedule. Please bear with me. 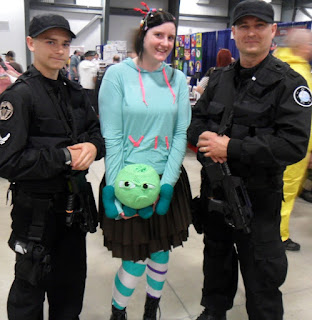 Hathor from Stargate with Loki. The havoc these two could cause… 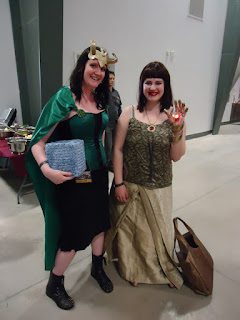