The story is extremely simple and a perfect transition from the simpler superhero movies of the 2000’s to the more complex ones after.

It’s amazing that they managed to have a movie set in WWII that had only 3 Nazis.

The villain is scary smart if over-the-top and the story is wonderfully soothing.

As much as I love the romance between Cap and Carter, the convoluted obstacles are tiresome and unnecessary.

I would also would have liked more nuances on the concept of patriotism, but that would come with the future movies.

This movie was extremely well cast and all the actors play their roles wonderfully. Again I think Red Skull was a little much, but all the others are fantastic.

This movie, more than Iron-Man or Avengers, sets the bar for Marvel dialogue. It’s clever, quotable, and has fantastic depth.

The movie’s special effects still look amazing a decade later and visually this movie is a treat.

The music is fantastic and works perfectly for the movie.

Our Blu-ray has a bug where the dynamic range (loudest vs softest sounds) is huge, making me spend most of the movie changing the volume or not being able to understand the words. This is actually pretty common for Marvel movies and really pisses me off.

That being said, the movie kept the attention of the entire family and made me want to re-watch all the Marvel movies.

The unambiguity of the movie is its strength, bolstered by its fantastic dialogue and acting. It was the last before Avengers changed the landscape and set the bar for storytelling. It is by far the best Marvel Phase 1 film (Arguably Phase 2 also).

An article showed up on my news feed recently and it’s not unique. Every time there’s a big movie or TV show, I see similar articles. Avengers, Star Wars, Game of Thrones, etc. Interestingly it’s usually the male partner making the demands.

If you don’t want to read the article, it’s your usual list of demands that a guy has given his girlfriend for when they go see Avengers Endgame. These demands always include the following things: No talking, No eating, No peeing, and you can leave if you want but I won’t care.

This article even had a clause where she was in charge of the kids if there was an emergency and she couldn’t bother him.

Fandom is rife with bullying. From Gate-keeping which only allows “true” fans; to Taste-keeping which categorizes things into “good” and “bad” forms of media, mocking anyone who likes the latter. These are both commonly used to tease or insult others. Especially others tastes. It’s also extremely common.

Fandom is also rife with abusive behaviours. If your significant other gives you this list of demands, or something similar, refuse to participate in the activity. They are either trying to control you or are so blinded by passion that they don’t understand that what they’re doing is abusive. Don’t let anyone make you feel like you’re wrong for enjoying something differently than them.

If you are the person giving this list to someone, don’t. Seriously, if this piece of media is so important to you that someone shoving popcorn in their mouth will ruin your fun, then don’t take that person. Go alone, pirate it and watch it in your room, or a hotel room. Buy out the cinema. Or just go see it multiple times and don’t care.

This behaviour is not cool, it’s not right, and it’s not healthy. These events, shows, media, etc; are meant to be enjoyed and everyone enjoys them differently. If you can’t respect that, go alone.

WARNING: I have tickets for Tuesday evening at the Cineplex Ottawa on Carling. I plan of getting a large drink and popcorn. I will go pee at least once during the movie. I will laugh (probably before you) at the jokes, and boo or groan at the fat jokes (yeah I know what fucking year is it that there has to be fat jokes in this sort of movie?). I will whisper to my wife and I will exclaim when it’s appropriate. If you have a problem with this, don’t go to the same showing.

I don’t think Loki need any introduction, if you’ve been following my blog.

Look at those props!! That staff! And the headpiece?! So incredible.

You might think that these two terms are the same, and for myself, they are. However, there are people who do not identify as female, and using the term “breast feeding” might generate a feeling of dysphoria in them. So I am trying to use the term “nursing” universally.

I chose to nurse Dragon, rather than to use formula. For multiple reasons, this was the best choice for us. On top of the doctors and nurses telling us that nursing was the only way to go (I felt bad for the woman in our baby classes who was choosing to formula feed. The nurse running the class was shaming her), it’s so much cheaper to nurse than to buy formula, and it’s much faster to feed the baby when nursing; shirt goes up, bra goes down, baby latches to the body.

While the woman in my class did choose to formula feed, there are many people who don’t get that choice and must use formula for a variety of reasons. No one should be shamed for their inability or choice when it comes to nursing.

Nursing was really confusing to start with, because I constantly felt like I was doing it wrong. Is she latching properly? Is she getting enough? How do I hold her? How can she breathe?

One of the major benefits of being at the Queensway-Carleton Hospital was that my nurse was someone that I’ve known since she was 3 years old. I felt very comfortable asking her for help. The QCH also has excellent lactation consultants. There are numerous places you can go to if you need additional resources as well, like ottawa.ca/prenatal, parentinginottawa.com, lllc.ca, breastfeedinginc.ca, ottawabreastfeeds.ca, and 311 during business hours to talk to a public health nurse. The QCH also offers nursing classes on certain days.

Fortunately, we figured things out fairly quickly, which I am grateful for, and my milk came in after about 48 hours, so Keladry didn’t lose much weight before she started gaining it again. There’s nothing like seeing the numbers on the scale drop to make you feel like you’re failing as a parent, and this happens right after birth.

Interesting things I discovered about nursing

There’s something called let-down that happens when the breasts fill with milk unexpectedly. (I say unexpectedly, because I am often surprised by it.) This happens after a certain amount of stimulation of the nipple. The amount of time required for this varies from person to person, and the amount of let-down varies as well. I’ve discovered that if I’m already full of milk, let-down causes some milk to escape, even if the baby is attached to the other side. I assume to see a problem here. I’ll come back to that.

So to get back to that problem. The problem of leaking. I find that I have this problem most often at night, because Keladry is a very good sleeper. If she has fed well enough before bedtime, she has slept 8 hours straight. Compare this to during the day, when I feed her every 4 hours or so. You can imagine that that extra 4 hours means that I am incredibly full. I’ve had several incidents of waking up with a soaking wet pyjama top.

Nursing pads! I commissioned these from Crafty What-Knots, and OMG they are the most comfortable things of life! The pad on the bottom left (the purple one) is showing the inside. It is a super soft material that I want to rub constantly, and it is incredibly absorbent. There is an inner layer that is extra absorbent. Then the backing…the awesome backing that is the reason you should get your nursing pads from Crafty What Knots; I told her that I loved all things geeky, and she found me Avengers, Star Wars, Star Trek, and Minion fabric!! The backing protects my clothing by locking the wet inside the pad.

I am so impressed by these pads – they’re big enough that my shifting around at night doesn’t move them (which was my problem before), and they’re exactly what I wanted. (She can do non-geeky fabrics, too, if that’s what you want.)

This tiny Thor couldn’t wait to get his hands on the TARDIS. Or maybe it looked like food, because right after this picture was taken, he tried to put it in his mouth.

Toothless from How To Train Your Dragon. Amazing costume! 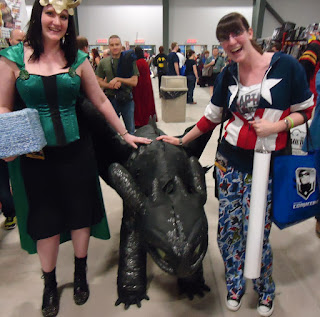 From Game of Thrones: 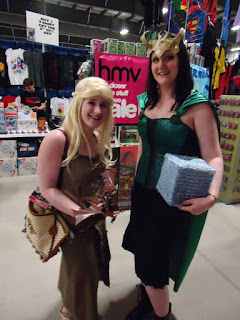 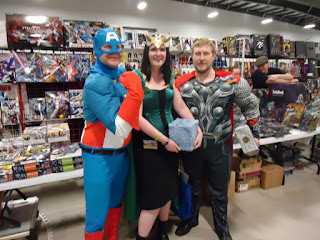 Avengers (some of them) and Loki 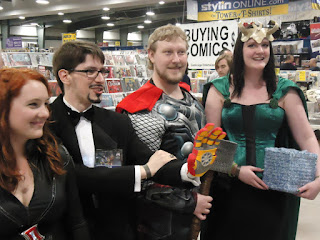 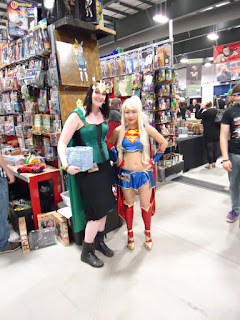