Hello everyone! My name is Rebecca and I’m so happy to be writing a guest post for you today!

I’m turning 28 this year, and like a lot of people my age, I was BIG into Harry Potter as a kid. Midnight releases for books and movies, all the merch, playing Harry Potter games with my sisters, the whole deal.

So when a good friend from University invited me to a conference in London, England, I knew I would have to visit some Harry Potter attractions.

We had a busy trip, and while I didn’t make it to King’s Cross Station (oh look, a great excuse to go back to England!) we did go to the Warner Brother’s Studio Tour to see the sets and props used in the making of the movies.

And it was so worth it.

The Studio Tour is outside of London and the tube doesn’t run there. However, there are lots of travel packages  that offer a bus to and from the tour, departing from convenient places around London (often near major hotels).

The only downside of taking the bus is that you have to catch it to get back to the city! I could have stayed all day! That being said, the timeframe that we had (approx. 3 hours) was reasonable and I never felt like I had to rush by something super fast to be able to make the bus.

The tour is set up a bit like a museum; most of the items are behind railings so you can’t touch, and there are information sheets all over telling you about each item, and fun “behind the scenes” facts. There are also video clips playing –  from the movies, as well as interviews with the cast and crew.

The tour begins in the Great Hall, as if you were a student arriving at Hogwarts for the first time!

One thing I appreciated was that there was no forced Sorting ceremony. While this might be fun for some people, I know that for many adult fans, we know our houses and definitely have strong house loyalty! (Team Ravenclaw here!)

The great hall was amazing, (the whole tour was) but there were two instances in particular that gave me the WOW factor.

Do you remember in Harry Potter and the Philosopher’s Stone when Hagrid takes Harry to Diagon Alley for the first time ? That was a magical scene in both the book and the movie, where you really get to experience the magic of the wizarding world.

Walking into the set for Diagon Alley – it all came flooding back. Suddenly I was 8 years old again reading my first Harry Potter book. That magic and pure joy was truly something special.

The second location where I got that feeling was the Hogwarts Castle room. This is where they have the model of the castle that was used for all the external sweeping shots. You can see every tower, all the grounds, Hagrid’s hut. I actually teared up a bit.

Aside from the marvel of all the sets and props, the staff were also amazing. In Ollivander’s wand shop, they’ve written the names of cast and crew on the wand boxes. When I was there, a staff member was sitting with a young child who was asking where all of the character’s wands were. And the staff member knew each one! She was using a laser pointer to indicate the appropriate wand boxes all around the room.  I’m sure that was a special moment for that child, and the staff member sure made an impact on the guests!

I could go on all day, but I don’t want to spoil that magical childhood transportation moment for anyone!

I would highly recommend this tour to any and all Harry Potter fans – no matter your age! I will note that part of the tour does go outside to the Knight Bus, Number Four Privet Drive, and a few other locations, so check the weather and bring a jacket if needed.

Thanks again to Jen, Eric, Dragon, and baby Pegasus for the opportunity to write for you today!

Are you a fan of Harry Potter? I know of only a handful of people who aren’t. (You know who you are!)

Do you want to go to Hogwarts? Do you want to play Quidditch? Ride the Hogwarts Express and Knight Bus? Learn and practice spells?

Yeah, I really want to do all these things…

Chestnut Hill College will be transformed into Hogwarts, there will be a Quidditch Tournament, and a festival taking up 10 city blocks over the course of the two days.

There is also a Harry Potter Conference happening October 20-21, 2016!

Surprisingly, Chestnut Hill is in the Northwest corner of downtown Philadelphia, Pennsylvania.

If you are interested in booking a trip to Philadelphia to visit Hogwarts. You can contact Jennifer Desmarais through Orleans Travel. jennifer.desmarais@orleanstravel.ca

The most hated character from the magical world managed to get her hands on the TARDIS. I think I broke one of her Educational Decrees. Yikes!

Thank you to Popsquatch Designs for being such a good sport! You were fantastic!

Hermione with her Prefect badge, and the purse that holds everything! Rowena has her diadem!! I love the detail these two put into their costumes. 😀

By far my most exciting, and yet disappointing pictures. I was SO ridiculously excited to meet Tom Felton, and I asked if I could get a picture of him holding my TARDIS. He said he couldn’t hold it, but I could put it in front of him and take a picture. And then he picked it up. “This is so cool” he said. “Isn’t this cool?” showing it to his PA. “You did a great job with this” he said to me. All the while I was frantically trying to get a good picture and stop freaking out. He even stopped to pose, and my camera wouldn’t cooperate! 🙁 He was so nice about it. I have a new-found love for Tom Felton. He is a super nice guy!

An abandoned alleyway is usually where the Doctor parks his TARDIS, and Universal Studios didn’t have many. It was easy to spot the TARDIS. 🙂 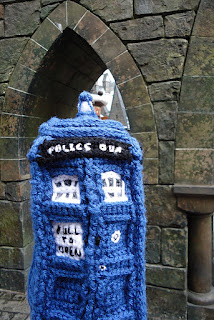 Travelling from Hogwarts to the Jurassic era, the TARDIS took a break in front of a velociraptor of sorts. Yikes! 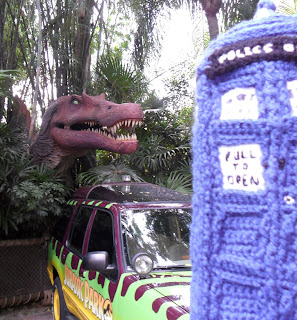 My Etsy store is having it’s 25% off for Cyber Monday sale. This ends tomorrow morning at 6am! Hurry to order to get your gifts before the Holidays!

Welcome to Black Friday! The sale is now on at www.etsy.com/shop/JenEricDesigns You can take the Hogwarts Express to get there! 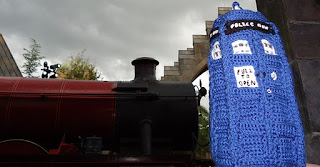 The TARDIS made sure to visit Hogwarts for the very first time. Here it is at a distance. (From the back of the Three Broomsticks, I believe.) 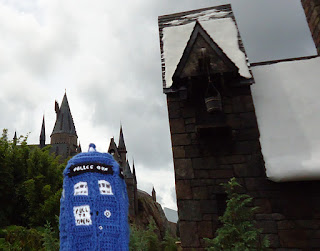