I’m feeling pretty crappy right now. Some sort of bowel/indegestion/pain/thing. I had decided to do NaNoWriMo sort of but I’m starting to think I’m cursed. This will be the fifth year I’m not feeling well at the beginning of November. Sometimes it was just allergies but a few times it’s been like this. sigh. I’ll still try once I can concentrate.

So short post but enjoy this adorable picture of the brood at halloween.

Good luck to those that are writing!

Be safe and be kind, 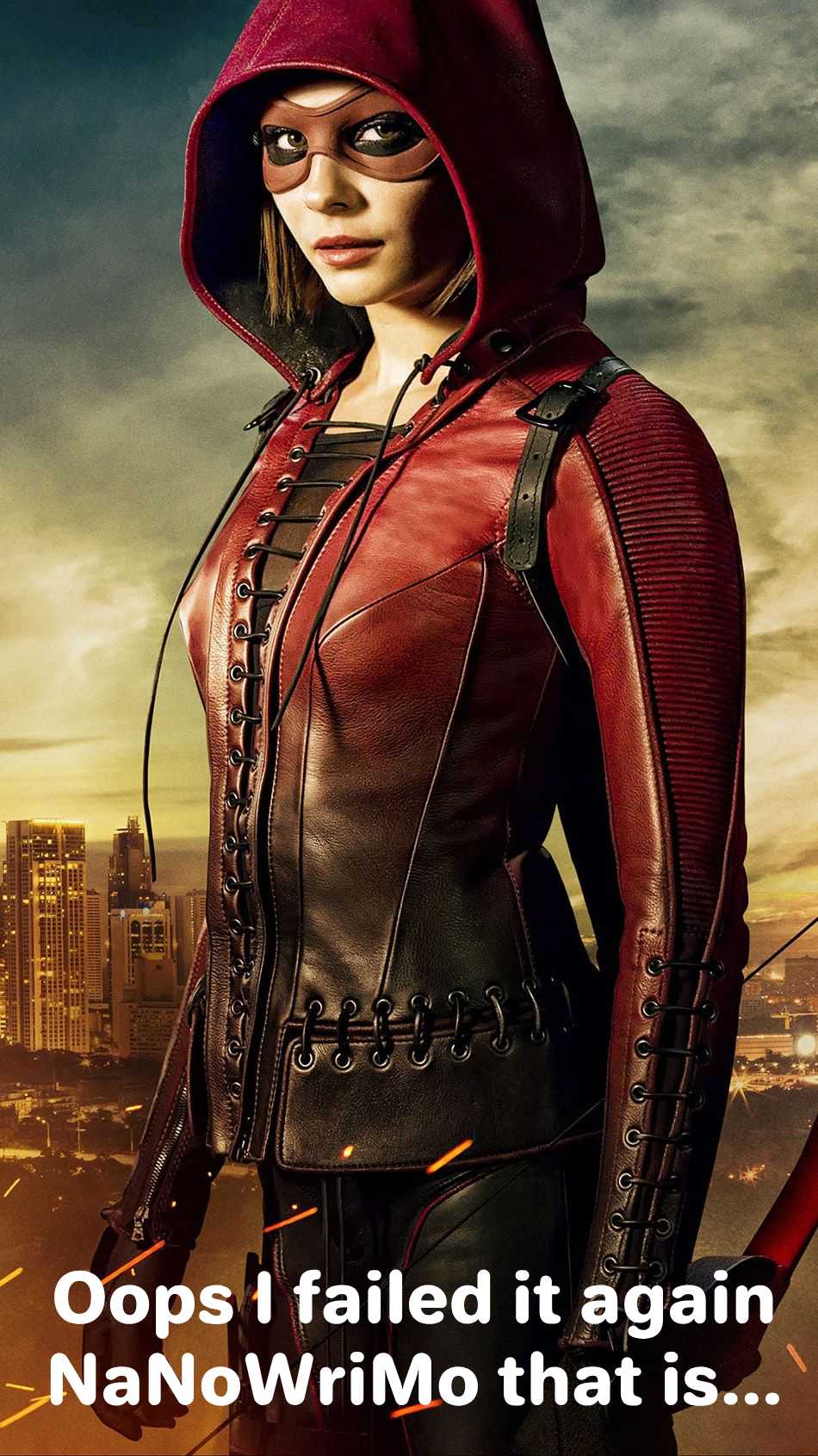 It might be time for me to admit that NaNoWriMo isn’t my jam anymore. It’s not even my honey or peanut butter. (I think I may be hungry.)

Anyway, this years NaNoWriMo was a continuing of the one I failed 2 years ago and I managed a whopping 1778 words… I didn’t try very hard.

Turns out when I’m stressed I don’t do a lot of writing and this November has been extremely stressful. Things are getting better and the only stress in my future is holiday or writing.

I’m going to continue with this story and hope I can finish it early in the New Year so I can get back to Elizabeth 4.

Some days staring at the unwritten parts of a novel I freeze and wonder if I can actually do this. In those times I need to remind myself I can and have.

Here’s he list of things I’ve written, excluding short stories and serial stories, for the past 10 years.

This is the first and early part of my career and I hope to keep writing and publishing for another fifty years.

It’s important to remind myself that I can do it. I’ve done it 7 times before and I’ll do it again. It’s hard and lots of work but totally worth it.

Ok, peptalk over. Back to writing.

For the second year in a row, I have failed NaNoWriMo and neither I or Oliver Queen isn’t very happy about it.

This is the second year in a row that I failed NaNoWriMo and it’s partially because of how busy I am and partially because I didn’t want to kill myself writing. What it really means is that I decided to take my health and mental health and put it before my writing. It’s something I will always do because my writing is something I love and I’d rather fail a word count than burn out and not write for months.

Last year’s novel was crap. It needs a complete re-write with some serious consideration about what it is. I consider it a failure on every level.

This year’s novel needs polishing and another couple of thousand words and it’ll be done. This was a very personal novel; part memoir and part memory. It might never see the light of day, I’ll get my Weditor and others let me know.

So if you didn’t win at NaNoWriMo then you should still be proud that you wrote something because that’s the goal.

I’ve decided to do NaNoWriMo again. If you haven’t come across the term it stands for National Novel Writing Month. In short, during November a whole lot of writers and aspiring writers try to write 50,000 words in a brand new novel.

This will be my fifth attempt. A Study in Aether and The Sign of Faust were both started with NaNoWriMo. It’s a wonderful (if stressful) way to jump start a book.

What Am I Writing

I was listening to a particularly sad song by Ed Sheeran called Supermarket Flowers.

The song reminded me of an old book idea I had about taking a roadtrip with my Mom in an alternate universe where there were dinosaurs roaming around.

The original idea was an apocalypse story, but listening to this song I realized how much I miss talking with my Mom. It’s been 9 years since her death and this book will give me the chance, in an odd way, to spend one last roadtrip with her.

It will be one long conversation between me and my mom. A memoir, love letter, with dinosaurs.

When I wake up in the hospital where I was born, I find my Mother waiting for me. Instead of going home, she decides that we should go on a roadtrip. “Let’s get lost,” she says with a mischievous look.

Over the trip we’ll reminisce, laugh, and tell each other things we never had the chance.

But why are we on this trip? Why was I in the hospital? And why are we being followed by dinosaurs?

I can already tell that this will be the hardest book I’ve ever written, but I think I’m at the point in my life that I can write it properly.

I apologize in advance if I’m not overly active online or if I’m a little sad over the month of November.

Follow my progress on my NaNoWriMo page. Add me as a buddy if you’re also diving into the pool of imagination.

I’ve had a story stuck in my head for the past few years. At first I thought it would make a cute picture book but lately I’ve been thinking of writing it for older children. I started it as a picture book and it didn’t feel right.

In the original version, below, I had originally planned to have Elizabeth be wrong about the wizard, one of those over active imagination stories. The more I think about it the more I realize that it’s an idea much more suited to a form of Urban Fantasy. I’m toying with the idea of making it into a Detective novel.

I’m still having trouble deciding what age group to write it for. I like the idea of the Middle-Grade story but I’m worried that’s too young. I could do Young adult but I’m not quite sure if I can handle writing a teenage girl. I’m also not very sure of the difference between the two genres.

Tell me what you think?

Elizabeth saw the mittens on the ground. Every day in winter there would be a new one somewhere in the city, all alone in the cold. She wondered what it would be like to be one of those mittens lost on the ground in a Canadian winter.

It was just such a day as she passed a pretty pink mitten that she wondered what if the mitten was a little girl like her? What if there was an evil wizard turning children into mittens. It scared her and she decided not to think about the poor pink mitten.

One day Elizabeth’s best friend Sean wasn’t at school. She asked Misses Coderre, her teacher, “Where’s Sean?” and the teacher told her, “I don’t know Elizabeth, maybe he’s sick? You should call him and see how he is when you get home.”

The day passed very slowly and Elizabeth had a bad feeling that something had happened to Sean. At lunch she asked all the other kids in the yard, “Do you know where Sean is?” and no one knew.

Just as the lunch was finishing she saw a lonely brown mitten, which looked just like Sean’s lying on the ground. “Oh no,” she thought, “The Evil Wizard changed Sean into a mitten.”

Sean was her best friend and she couldn’t leave him outside, she took the mitten and placed it in her pocket. He would be safe there and he wouldn’t be cold.

She went to see Misses Coderre again and showed her the mitten as she said, “Misses Coderre an Evil Wizard turned Sean into a mitten and I don’t know what to do.”
The teacher looked and Elizabeth and then at the mitten she was holding, “You’re right Elizabeth that does look a lot like Sean’s mitten. You should tell him he lost it tonight when you call him.”

Victory has been achieved and it only took me a year and a half. I finally finished Viridian Sky and even did some basic editing.

I’m just waiting on my Weditor (Wife & Editor) to go through it and then I can send it out to everyone who asked to read it.

Thank you for your patience.

Victory has been achieved and it only took me a year and a half. I finally finished Viridian Sky and even did some basic editing.

I’m just waiting on my Weditor (Wife & Editor) to go through it and then I can send it out to everyone who asked to read it.

Thank you for your patience.

I’ve been working hard on cleaning up the storyline for Viridian Sky, my NaNoWriMo novel. Mostly I’ve placed structure and decided on an ending. I still have a good twenty thousand words left to write but I’m getting there slowly. For those of you who have been waiting a long time to read it I’ve included the first chapter after the cut.

I’ve been working hard on cleaning up the storyline for Viridian Sky, my NaNoWriMo novel. Mostly I’ve placed structure and decided on an ending. I still have a good twenty thousand words left to write but I’m getting there slowly. For those of you who have been waiting a long time to read it I’ve included the first chapter after the cut.