This year I seem to have watched, and reviewed, 73 films. Wow. Below is a list of them in decending star order. Within each catergory they are in alphabetical order.

What do you think? Do you disagree on any films?

At times the movie is brilliant and others you wonder how that story point got past editing. It’s a bare bones slightly goofy plot. The world building is interesting and other than a few cringy moments it’s great.

I like the near complete reversal of traditional gender roles in holiday movies.

Nick is at times a clueless goofy idiot and at others a wise loving Santa… It’s a role that should be hacky and terrible but is made believable by Tom Cavanagh. (Seriously this role shouldn’t work, but he makes it not only likeable but one of my favourite versions of Santa.)

The rest of the cast is perfectly suited and well acted. Ashley Williams manages to play up the humour of her attraction to Nick without ever coming off as lewd.

It’s a made for tv movie from the mid 2000’s the visuals are okay. The cinematography is bare bones and the special effects are mostly limited to the mirror and a flying reindeer. The costumes are very well done, especially the Santa Suit at the end.

The music is fantastically well thought out. I’m not humming the themes but they were perfect for the characters and had a quirky cheerfulness that saved some scenes from being too serious or too scary.

The dialogue is clever and adorable. Also very dorky. I loved that we went from, “Nick… name… mine… my name is Nick.” at the begining of the movie to, “The first time I saw you I forgot to breathe.” near the end.

My wife and I have been watching the movie yearly for a decade and a half. It’s a Christmas staple that I enjoy. I’m not sure my kids liked it as much.

The movie is both adorable and aDORKable. The actors elevate what could have been a weird and uncomfortable movie into something lovely and fun.

Tom was a delight to meet. Most of the people in line were there for him because of The Flash, but not us. (You can find him on Twitter here.)

We were there because he plays Santa in our favourite Christmas movie: Snow.

So we asked him if there was a chance of a third movie (because there’s already a sequel). He said that if there’s a good enough script, he’d do it. Nice.

The sign on the back of our daughter’s shirt has our business name, our table number, and Eric’s cell number, just in case she got away from us. She never ran away. What a great little 2.5 year old! 😀 (P.S. I was pregnant with Adrien at the time of this picture. He’d arrive in a little over a month and a half from this day.)

JenEric Designs and Coffee will be celebrating the season TONIGHT, and the snow, the best way possible. With great people in a pub.

Come join us at the ChiSeries Ottawa Holiday Bash.

It’ll be a tiny holiday market with plenty of cool stuff and I’ve heard rumors of shenanigans.

Hope to see you there!

“Snow Pixie Flakes” by Michael Tuinstra from Cambridge, ON and David Tettman from Mississauga, ON both in Canada. 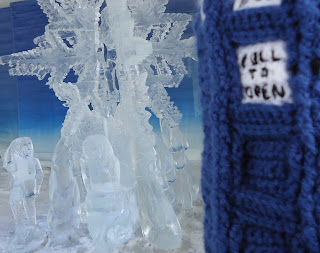 In honour of the snow that is falling (and hopefully staying) on the ground today, my picture is of the Gryffindor snowman made in Hogsmeade. I have to say, it felt incredibly weird to be SO hot in Florida, but to be surrounded by snow in Hogsmeade. 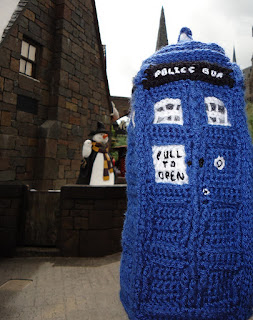 I also have an announcement to make! This Friday, I will be cutting my prices in my store www.etsy.com/shop/JenEricDesigns by 25%, in honour of Black Friday. I may keep the prices cut until Cyber Monday, but that depends on many factors.
Tell all your friends! Black Friday sale 25% off!!!