An elegant Poison Ivy graced us with her presence! Costume designer Jasmine M-B is incredibly talented!

Anyone who knows me, knows that I love Wonder Woman. What did you think of her in Batman V Superman?
I adore this Wonder Woman costume! Great way to show her love of the character and make it her own!

No spoilers for Star Wars: The Force Awakens in the post or comments; I promise to delete any that come up.

Boba Fett and the Joker are an unlikely pair, and yet here they are. Doctor Who unites all!

Would this be Darth-Bat? Or Bat-Maul? Either way, he needed help holding the TARDIS. He was too adorable!

Batman was quite happy to get a picture taken with the TARDIS! (Cutest Batman ever!!)

My wife has started a new job, it’s a summer job that will go into part time while she finishes her degree but I’m very proud of her. She’s a Travel Agent with AJ Travel Canada. She’s a specialist in Fandom Travel and Special Needs Travel.

Please feel free to contact her starting in May for all your travel needs.

Another person in my life that is ridiculously talented is my brother. He’s an actor, director, screen writer.

He directed and played the joker in this fan film based off of Batman and Silence of the Lambs.

Here’s his writing and directing debut.

If it’s no obvious, I’m ridiculously proud of both my Wife and my Brother.

The Poll for my next serial story is still open.

An Urban Fantasy / Science Fiction, following a faery woman who must do one last job for her robot overlords before they let her go free. Can she stop the aliens from invading or would they be better than the robots?

A Supernatural Action/Romance, following a human girl who’s enrolled in Monster University in order to avenge her parents. Can she slay her new friends, keep up with classes, and avoid the cute demi-god that likes her?

What serial story should I continue this year?

The Doctor and Batman would get together to stop Bane. Talk about a Justice League!

These costumes were so fantastic! I hope that they got to see the Con, because so many people were taking pictures of them! 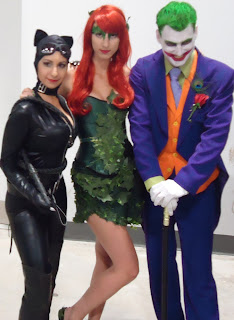